Warden Journal – memories of the Warden Service, by Darryl Grams

Thank you to Darryl Grams for granting permission to use his response to our invitation to take part in an Oral History interview.

I  have thoroughly enjoyed reading the oral histories provided by some of my previous colleagues  and the  references to other wardens of that era in Lake Louise during the 1970s. You and the other interviewers are bringing to life some incredible experiences for others to enjoy.  In my few years there,  guys like Jim Rimmer, Dale Loewen, Scott Ward, Jay Morton, Rick Langshaw, Monte Rose, Jack Woledge, Paul Kutzer, Jim Murphy, Doug Ohrn, and Larry Gilmar….made up a crew of powerfully interesting characters with lots of stories to create every day of the adventure on the job. These personalities were like some type of fictionally invented characters in the script of a  western adventure novel for me. Their accomplishments as well as their antics in both their private and public lives are incredible.   My involvement over those few years that I enjoyed as a seasonal warden was limited and I would not have much to contribute from my own career.  As a suggestion, I find the stories and experiences of wardens such as Dale Loewen and Don Mickle to encompass powerful images of that era, they are both great story tellers.  Repeat interviews with additional depth on their experiences would add even more valuable elements to the history of the warden service.  An interview with another evocative guy such as  Bill Moffat would also add lots of colour to the oral history work.

One aspect of the job that was particularly rewarding was working with the horses of that decade. Guys like Dale Loewen would have additional good horse story wrecks and anecdotes to share his experiences would provide a richer background to this oral history project than I can.    The personalities of the “ponies” were also pretty interesting for me, Chip with his nervous energy, Bell, the old gal who was on her last tour of duty after some 27 odd years,  Evan, a solid ride that liked to spook ya every once in awhile with a big  crow hop sidestep to insure that you were paying attention, Twig the honest swayback that would always step out with a quick pace, Cinders the meanest of the bunch, a true psychopath who would look for ways to explode on ya just to see how he could make a wreck on you as a rider or throw your packs to  show you who was truly in charge, Bog, and Barney were his quiet compatriots on the trail,  Casper the long legged reject from the RCMP Musical Ride, Clover a real trooper that would balk at nothing if you asked her, Belinda the lanky gal that never had any energy  and seemed to be walking in her sleep, Buff the dependable bulky pack horse with real muscle, Snap who delighted in throwing kicks that would almost let him scratch his ear, Niger a black stocky wildee from the foothills who busted both my wrists early one spring day, other dependable soldiers from the trenches were horses like Sailor, Captain, or even Becky the looker that had style and not much else. 😉

Thank you for the invitation (to participated in the Oral History Project), if this invitation is available at a future date I will reconsider it.

Keep up the good work! 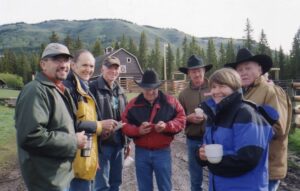 2004 Reunion at the Ya Ha Tinda Ranch